There’s an axiom on defense, “don’t finesse partner”.  What does that mean?  Here’s an example: 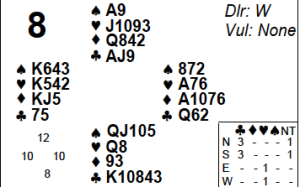 The contract is 1NT by North after an uncontested auction 1D-1S-1NT.  East’s opening lead was the H6 to the 8 and K.  The H2 was returned to the 9 and A.  East shifted to her 4th best D (the 6) and West “finessed her partner”, i.e. she assumed that North had the Ace and East the Queen.  She played the Jack and North took the Queen.  The Club Q was onside and careless discarding led to a top board for North-South.

The lesson:  retain an honor when there’s a lower honor in Dummy.  If there’s no honor in dummy then usually you should play Third Hand High with this holding, especially at NT.